The 25th of every month has been designated as Orange Day by the UN Women campaign Say No, UNiTE launched in 2009 to mobilize civil society, activists, governments and the UN system in order amplify the impact of the UN Secretary-General’s campaign, UNiTE to End Violence against Women. Participants the world over are encouraged to wear a touch of orange in solidarity with the cause—the color symbolizes a brighter future and a world free from violence against women and girls.

November 25, International Day for the Elimination of Violence Against Women [UN]


the Declaration on the Elimination of Violence Against Women issued by the UN General Assembly in 1993, defines violence against women as “any act of gender-based violence that results in, or is likely to result in, physical, sexual or psychological harm or suffering to women, including threats of such acts, coercion or arbitrary deprivation of liberty, whether occurring in public or in private life.” It manifests itself in forms encompassing:

Around the world, 37 million people are living with HIV, the highest number ever, yet a quarter do not know that they have the virus.

The General Conference of Seventh-day Adventists Special Needs Ministries (also known as Disabilities Ministries) actually prefers a more descriptive term, "Possibilities Ministries." Larry R. Evans, DMin, Assistant to the President for Special Needs Ministries explains. "The recipients receiving the 'disabled identity' are reminded of what they cannot do. But when they learn that their lives are significant in God’s sight and each person has a purpose, they begin to see their future differently. Their future changes from a perspective of impossibility to that of possibility. Their thinking changes. It is no longer based on a model of scarcity, failure or shame. With God, life is more about possibilities than impossibilities."


October 14, Every Child. Everywhere. In School.

ADRA launched its campaign, Every Child. Everywhere. In School, campaign, October 14, 2019 during the General Conference Executive Committee's Annual Council in Silver Spring, Maryland USA. It is an appeal to Adventists around the world to join a global, Adventist-led movement to ensure that all children are able to attend school, complete their education, and have a brighter future. ADRA quotes these statistics in the marketing materials for this campaign:

The Seventh-day Adventist Church values the unique role that women play in fulfilling the church's mission to spread the gospel. Part of that mission involves meeting the physical, intellectual, and social needs of those around us, just as Jesus did when He lived on earth.


Research indicates that six major challenges in the lives of all human beings—women in particular—are: literacy, poverty, abuse, health, work hours and conditions, and opportunities for training and mentoring. To better meet these needs, the Office of Women's Ministries of the Adventist Church has launched a major thrust on literacy training for 1995.

The inability to read impacts every aspect of a person's life—earning power, career opportunities, access to health care information, and even the ability to raise a child properly. Without the skill of reading, few doors of opportunity can ever be opened.

Teaching reading creates endless possibilities for people to be informed concerning such topics as careers, health, parenting, and marriage, and offers the teacher unexcelled opportunities for touching lives through ministry.

Adventists recognize a more vital reason to share the gift of reading. We believe that the ability to read God's Word—the good news of salvation—should not be reserved for the privileged few. We assert that every man, woman, and child should have access to the truths and uplifting power of the Bible.

Visit the redesigned website for Creation Sabbath at creationsabbath.net. Creation Sabbath, the fourth Sabbath of October, is a special Sabbath set aside to refocus our attention on the central theme of the Bible; our Creator loves us, has earned salvation for us and offers us abundant life (John 10:10).

God's Path to Resilience was written by Dr. Julian Melgosa, associate for the General Conference of Seventh-day Adventists Department of Education. The year's topic is one we have never discussed before—Resilience. How do we rebound from life's major challenges? Abuse, whether experienced as a child, or through a violent act, or within the home leaves scars that can last a lifetime. God is our Healer and our Helper in all trials. He has given us doctors, counselors, friends, and family members who will walk with us through the healing process. The alternate seminar, Forgiveness: A path to resilience, is written by Debbie Maloba, director of East-Central Africa Division Women's Ministries, and explores how the healing power of forgiveness provides resiliency following trauma and heartache.


WIDOWS: Ways you can help widows in your church. 1) Stay connected to your widowed friend: keep asking her to join you in regular activities and, eventually, she will. 2) Remember that pain causes a certain kind of weakness: her arm is too weak to lift the phone and call you—you must call her and suggest what to do. 3) Say you are sorry for her loss and listen, over and over again, to her story, not trying to tell your own. 4) Tell stories—serious or funny—about her husband and remind her that you miss him, too. For more of Miriam Neff's suggestions, go to www.crosswalk.com

This year's packet titled, The Call to Arise and Shine, was written by Raquel Arrais, associate director of women's ministries for the General Conference of Seventh-day Adventists. The theme of light and darkness winds throughout this examination of Isaiah's prophetic oracle (60:1, 2) to "Arise, shine; for your light has come!" It can be understood in four parts: as a clear message, an wholistic message, a message to call us to serve, and a message to challenge us, particularly, in the darkness of these last days. "If there ever was a time in the history of the Seventh-day Adventists when they should arise and shine, it is now....It requires moral courage to do the work of God for these last days" (Ellen G. White, Christ Triumphant, p. 358).

[UN] International Women’s Day is a time to reflect on progress made, to call for change and to celebrate acts of courage and determination by ordinary women who have played an extraordinary role in the history of their countries and communities. 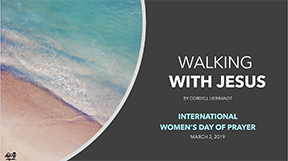 [GC] This year's packet titled, "Walking with Jesus," was written by Cordell Liebrandt, a pastor in the Cape Conference of South Africa. Prayer is an important part of discipleship. The disciples asked Jesus to teach them how to prayer (Matthew 11:1). In many places in our world church we think of discipleship as nurturing and growing new believers. But discipleship never ends in our own lives; it is a lifelong process. The sermon focuses on the call for discipleship, the cost, and consequences of discipleship. Our prayer is that this message and the entire packet of resources will encourage you to make prayer a daily part of your discipleship growth.

[UN] Female genital mutilation (FGM) comprises all procedures that involve altering or injuring the female genitalia for non-medical reasons and is recognized internationally as a violation of the human rights of girls and women.

It reflects deep-rooted inequality between the sexes, and constitutes an extreme form of discrimination against women and girls. The practice also violates their rights to health, security and physical integrity, their right to be free from torture and cruel, inhuman or degrading treatment, and their right to life when the procedure results in death.