September 8, International Literacy Day [UN]
The Sustainable Development Goals adopted by world governments in September 2015 include in its agenda the universal access to quality education and learning opportunities. Sustainable Development Goal 4 includes a target of ensuring that all young people achieve literacy and numeracy and that adults lacking these skills have the opportunity to acquire them. 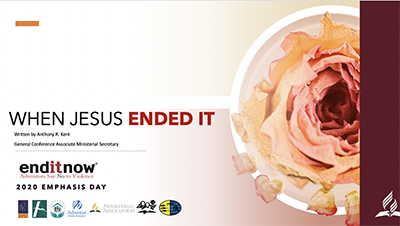 [GC] The 2020 enditnow® Emphasis Day sermon and resource packet titled, When Jesus Ended It!, is written by Pastor Anthony Kent, associate secretary of the General Conference Ministerial Association.  The seminar, The Wounds of Abuse: Can We Do More?, was published in Ministry® International Journal for Pastors, November 2018.

July 30, World Day Against Trafficking in Persons [UN]
The 2030 Sustainable Development Agenda adopted by world governments in September 2015 includes goals that call for measures against human trafficking and elimination of all forms of violence against and exploitation of women and girls.
Download U.N.'s PDF booklet Global Report for Trafficking in Persons 2018 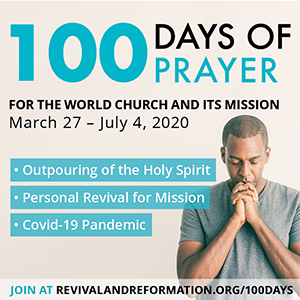 [GC] 100 Days of Prayer, revivalandreformation.org/100days, is time set aside for the world church to pray together for the outpouring of the Holy Spirit, for personal revival for mission, for the COVID-19 pandemic, for local churches to be a light to the world during this time of crisis. Join us as we focus on these issues. Daily readings and other resources are available.

March 21,International Day for the Elimination of Racial Discrimination [UN]

[UN] International Women’s Day is a time to reflect on progress made, to call for change and to celebrate acts of courage and determination by ordinary women who have played an extraordinary role in the history of their countries and communities. 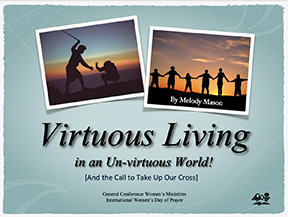 [GC] The 2020 International Women's Day of Prayer sermon and resource packet titled "Virtuous Living in an Un-virtuous World" is written by Melody Mason, author of Daring to Ask for More: Divine Keys to Answered Prayer, and the soon-to-be released Daring to Live by Every Word: Loving God with Heart, Body, Mind & Soul.

[UN] Female genital mutilation (FGM) comprises all procedures that involve altering or injuring the female genitalia for non-medical reasons and is recognized internationally as a violation of the human rights of girls and women.

It reflects deep-rooted inequality between the sexes, and constitutes an extreme form of discrimination against women and girls. The practice also violates their rights to health, security and physical integrity, their right to be free from torture and cruel, inhuman or degrading treatment, and their right to life when the procedure results in death.