Teacher sends biblical messages to more than 200 people a day

For six years, Eliéde has dedicated the early hours of the day to sending messages and Bible studies even to those she doesn't know.

Eliéde Rodrigues has dedicated her first hours of the day to sending messages to more than 200 people on various broadcast lists she created to share messages of hope and faith. “My routine starts before 5 am, because first I have my moment with God. Then I share the messages with people. Everything is calculated. After I’m done, I’m going to do physical activity and go out to work with a happy heart,” she details.

Eliéde's way of starting the day changed not only her life, but many other people's. With just over half a decade of ministry, she collects stories. “I met a lady at the fair. I used to buy fruit pulp from her, until I got her phone number and started texting her every day. Through this form of Bible study, she began to pay tithing. I was so happy when she told me,” says the teacher, who is also a school director in the city of Macujaí, in the countryside of Roraima.

The first transmission list, created in 2017, included children, sons-in-law, daughters-in-law, brothers, and acquaintances. It soon reached a total of 60 people. Today, one of the lists has 180 people.

In addition to the “Good Morning, Woman,” “Revived,” and “Day Meditation” messages, Eliéde also has a special group of people new in the Adventist Church, who receive from her, daily, the Sabbath School lesson.

“Some people don't even see the messages. Others see but do not respond. When I started, I was sad about it, but later I understood that I wasn't doing this for myself, it was for Jesus. That's when I understood that what I was doing was my ministry,” says the teacher.

Another group receives different messages daily: a powerful little phrase: “'I pray for you!' This one I send to 40 people, who are brothers that Jesus gave me: they are pastors, leaders and friends who have an agreement to pray for each other until eternity,” explains Eliéde. 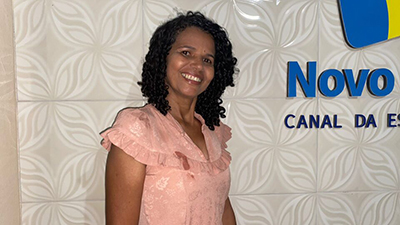 But not every day is flowers for the missionary woman. “I once wrote down a person's number wrong and she replied upset, saying not to text her anymore, because she didn't know me. I was sad, but I prayed for her even without knowing her,” she says.

However, there are people she has texted by mistake and thanked her. “I sent it to a wrong number and the person thanked me and even said that if it wasn't for that message, they would have made a mistake that day. To this day I send her a message and prayed for her almost two months in a special way, after she separated from her husband,” she narrates.

Mother of six children and grandmother of three grandchildren, she is proud of the upbringing she has given her children, who are now involved in the Church's activities. Currently, she works as a director and is divided between school activities, home, church, and family, which has now grown to include sons-in-law, daughters-in-law, and grandchildren.

She always seeks to innovate the messages. During the pandemic, she read two books and shared everything with friends through social media posts. “I'm sure someone read it along with me,” she believes. Eliéde sums up all her work in one sentence: “I have a mission that Jesus gave me: to take the gospel. And that's the way I found it, and I'm very happy with every thank you message I get."

She points out that it's not easy, especially on weekends, but when she thinks about giving up, she remembers how many people she's been able to help and how many still have to reach with her messages.