United Nations’ Commission on the Status of Women 60th Conference

The first workshop today is titled "A World We Women Want." I'm ready for a day of "shock and awe." Sitting in these seminars/workshops and listening to the reality of life for women in every country on the globe can be difficult, but it is necessary. How can I lead my sisters if I don't truly understand what they face in their daily lives? How can we as a church reach the world with the gospel of Jesus if we do not understand the pain of the people we want to reach?
I know that the United Nations cannot solve the problems of this world, only Jesus can. And only Jesus will wash away the sin and pain when He returns. Yet it is good to know that there are human beings in this world who want to make this world better in whatever way they can. Their views are not always my views, their values are different to mine, yet they too see the pain and want to help. There is some good in the world.

The day has finally arrived, and we are off to an early start in order to combat the anticipated long lines and tight security at the United Nations Headquarters, New York City. This is the beginning of my journey at the Commission on the Status of Women 60th Conference, with a theme I am absolutely passionate about: "Women’s Empowerment" and its link to sustainable development; and the sub-theme, "The Elimination and Prevention of All Forms of Violence Against Women and Girls." I have been invited by Heather-Dawn Small, General Conference Women's Ministries director, to attend this conference with her.
So, with breakfast in one hand and an umbrella in the other, we quickly make our way to the United Nations (UN) Building. The temperature in New York City today is 43 degrees, and being from the Caribbean, this is much lower than what I am accustomed to. It is also windy with a slight drizzle of rain. Our travel umbrella barely manages to accommodate both of us.
We stand outside waiting our turn. An hour later I can barely feel my toes, and I keep fidgeting excessively as my body tries its best to adjust to the change in climate. However, our hard work in starting early pays off because we avoid most of the crowd. Our almost seamless registration process ends with possession of our very own official UN passes. As we enter the UN compound, we can feel the energy and excitement around us. I see women dressed in their national costumes and speaking their own languages; all are here to work towards making this world better for women and girls.
Here I am, a medical student and youth leader from the islands, with my ticket in hand for the opening ceremony to be held in the magnificent United Nations general assembly room! Representatives and dignitaries from around the world now gather and patiently wait for the speech from the Secretary General of the United Nations Ban Ki-moon. Being the last address as secretary general to the commission, Ban Ki-moon does not disappoint. He highlights facts that women of all ages, religions, and nationalities face discrimination. He cites examples in leadership. He encourages a change in the cultural mindset that continues to promote the misconception that women are not capable of handling certain matters. He points out that even today some countries in the world do not have women in parliament and expresses the need to step things up towards achieving gender equality.
The Executive Director of UN, Phumzile Mlambo-Ngcuka, also addresses the commission, unwaveringly stating that the Sustainable Developmental Goals need to be implemented now, some of which include poverty eradication, ending hunger, and gender equality. She shares that projections at our current rate of progress show it will take us 50 years to arrive at gender parity and 180 years to ensure women and men receive equal pay for services.
The day is long, but exciting. I return to the hotel filled with information and a growing insight into the challenges women face globally.

Personal Thoughts from Heather-Dawn Small, GCWM director:
Someone asked me why I am here at the United Nations. Some Christians see this as a "bad" place to be, especially for Christians or Seventh-day Adventists. My reply is, "Why are there not more of us here?" This conference is about what women are doing to help other women. I know my Christian values and worldview are not the same as presented by many of these women, but that's okay. I take what is good and leave what is not. I'm here to learn about the challenges my sisters around the world are dealing with on a daily basis.
And when I say "sisters," I don't mean other Christian women, I mean all women. Jesus was an advocate for the poor, women, disenfranchised, abused, and hated people groups. How can we do less? Proverbs 31:8 says, "Speak up for those who cannot speak for themselves, for the rights of all who are destitute." Add that to Isa. 61:1-3 and Matt. 28:19, 20, and we get the complete picture of reaching the world. It's more than words, it's also action. But to act we need knowledge. What are the needs of those we are hoping to reach in our communities? How can we help? What are others doing? Being at this conference is giving me answers to these questions and so much more. So for those who may be concerned about my presence at the United Nations, don't worry for me. I have a mission, as do we all, so let's focus on that and not on these side issues.

My second day attending the Commission on the Status of Women Conference at the United Nations Headquarters will forever change the way I practice medicine. I attended a session entitled, "The Role of Women Physicians in Sustainable Development," which focused heavily on violence against women. Dr Theresa Rohr-Kirchgraber, President of the American Medical Women’s Association, shared her powerful experience highlighting something that is commonly practiced, but unknowingly to us can mean the difference between life and death for our patients.

She shared that she once attended an event and met a young woman who had been a victim of sex trafficking for many years. She asked her what we as doctors could have done to protect her. The young woman replied, "You did not ask him to leave the room." I know this resonates with many doctors because we are often trained to speak to the victim in front of the person bringing them in for treatment. This poor victim had been so close to being rescued so many times, but because the doctor did not ask the "guardian" to leave the room, she remained a victim of sex trafficking for years.

Dr Kirchgraber suggested that it be made universally compulsory that we ask the parent or guardian to leave the room and then screen these patients for evidence of abuse. This is not only useful in treating patients with abuse but any complaint as some may feel more comfortable sharing health-related information when they are alone with the doctor. I know that in some countries, we are trained differently, but I think we need to equalize our methods when treating victims of violence.

Tonight I sat in a small working group of young professionals discussing their role in achieving the Sustainable Development Goals. I heard well-meaning, wonderful young people going back and forth discussing interventions they have created to help marginalized groups, including women of color, poorer communities, and so forth.
Being the only person in my group from the Caribbean, I decided it was time to speak up.I think leaders fail to realize that their interventions do not have the impact necessary because they do not UNDERSTAND the communities they are trying to serve, neither do they have respect for them. Different does not mean less than. Poor does not mean worthless. We all know the problems, but the solutions are most times in the communities themselves. When we fail to understand and respect the persons we want to help, we fail to solve the problem.

My last session was the most inspiring. It was titled, “Change makers: Leadership Strategies to increase Maternal Awareness, Education, and Improve Outcomes, of Pre/Post Pregnancy Care.” 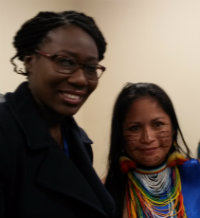 I met a “jungle mama” from a distant tribe in the untouched forest of South America. Where she is from there are no roads, no access to electricity, or any other modern amenities. Her tribe protects the virgin forests from development.

As part of their cultural custom, members of the tribe must not show pain or weakness, and hence, during childbirth the expectant mother goes into the garden alone and delivers her child by herself. Many mothers and infants have died because of this practice.

The jungle mama identified a need for something different and worked in her tribe to assist women through the birthing process, thereby changing a practice once feared into one that brings joy.

She is a change maker. She proved that just because something has been done the same way for years and seems to work, it does not mean that is the best way. Her innovation, bravery, and willingness to work toward her passion is saving lives and transforming a cultural norm.