The congress made an Adventist women’s ministry world record with its meeting attendance of more than 1,200 teenage girls.

[Papua New Guinea] About 5,000 women attended a women’s congress near Port Moresby addressed by Papua New Guinean Prime Minister, Mr. James Marape, Friday evening. He affirmed the women for being important to their Seventh-day Adventist Church congregations, the communities in which they live, and to their country of Papua New Guinea (PNG).

The Prime Minister stayed throughout the Sabbath hours at the women’s congress giving him his first opportunity to hear a woman preach. 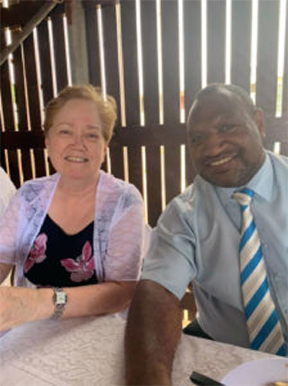 Erna Johnson, past director of women’s ministries for the South Pacific Division and guest speaker at the conference with the theme “Empowered to Arise and Shine” (Isaiah 60:1), spoke each evening during the weeklong congress. Johnson (left, with the PNG Prime Minister) used stories of Biblical women to demonstrate how God can also work in the lives of women in the world of today.

Johnson, who initiated outreach programs to teenage girls in PNG during her tenure, spent each day with more than 1,200 teenage girls, the most ever to attend an Adventist women’s ministry event anywhere. She was delighted upon returning to Port Moresby to see eager faces ready to learn and to be challenged. Throughout the week Johnson coached the girls on self-esteem, life skills, abuse, how to make good choices as one grows up, and additional topics of interest to the young girls. She also used a popular personality inventory with the girls.

Speakers during the third women’s congress held by Central Papua Conference at Bautama campsite, September 23 to 29, 2019, included Dr. Kola, Terry Litchfield, and many pastors. The presentations for the older women were topics such as how to start a small business, life as a widow, being single, parenting for new mothers, and many others.

Prayer times were held on many occasions during each day. Andrew Litchfield invited women to worship with music throughout the week.

Joy Koi, women’s ministries director of Central Papua Conference, and her team of organizers worked hard for months in order to make it not just an organizational success, but also an experience that would make a lasting effect in the lives of each woman and young girl in attendance.

Contributed by Erna Johnson, past director for women’s ministries of the South Pacific Division