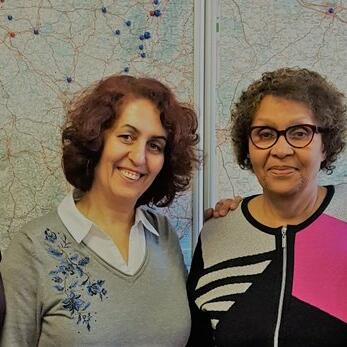 The following week, local church women's ministry leaders in the north of France gather to share joys and challenges.

[France] On Sunday, February 17, 2019, the new director of Women’s Ministries in France and Belgium, Corina Timofté, met with the women's ministries directors of the two French conferences for a dialogue and initial exchange of information. Also present was Dagmar Dorn, director of Inter-European Division Women's Ministries. Marie-Pierre Péchoux from Marseille, who is responsible for the south of France, and Enide Cadasse from Paris for the north of France informed about women’s ministries in their respective regions and about planned events. Dorn testified that Timofté can bank on her team in France, and the new director is looking forward to working together with them.

The women’s ministries leaders of the local churches in the north of French gathered for a meeting a week later on Sunday, February 24, 2019, in Bagnolet, France. The afternoon program was organized by Enide Cadasse, women's ministries director for the North France Conference. The occasion gave women a place and time to share their joys and challenges in a convivial atmosphere that included a devotional message by Pastor José Coulet, praise, good music, and delicious food. The feedback was very positive, with many women requesting that such encounters should be repeated regularly.

WM leaders in the local churches from the north of France region gather for sharing, planning, worshiping, and a little singing and eating

In any group of women in ministry, you will find women who like to make beautiful items (from the meeting in Bagnolet)

The Department of Women's Ministries exists to uphold, encourage, and challenge Adventist women in their pilgrimage as disciples of Jesus Christ and members of His world church.