Women of Greater New York continue 2021 virtual evangelism with Franco-Haitian series, "He Is Our Only Hope."

[New York] The evangelistic series, “Finding Shelter,” held virtually June 19-27, 2020 was a moment in time when people from around the world attending and participating felt God’s presence from night to night. International evangelist Della Patton blessed them each evening with messages from God. 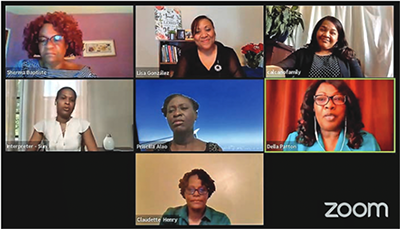 Although the series began on June 19, preparation began prior to the event with a prayer marathon, titled “More Prayer, More Power,” led by Claudette Henry, which lasted for several days. “We firmly believe that we can do nothing without the presence and guidance of the Holy Spirit,” said Priscilla Alao, GNYC Women’s Ministries evangelism advisory member.

Each night commenced with a different guest who opened with prayer, recap session held by Henry and Alao, a 10-minutes nugget presented by special guests, and special music by various singers. Prior to the nightly message, singing evangelist Juliet MacFarlane presented the message in song. After each message, prayer requests were shared.

Prayers were offered for salvation, faith in God, various illnesses, children and families, feelings of hopelessness, and the list goes on. Special prayers were offered for those sick with the coronavirus and those mourning loved ones lost due to the virus. The participants continue to petition the throne of God for the prayer requests.

The message was not only received in the U.S., but also outside of the U.S. borders in such countries as Peru, Grenada, Guyana, Haiti, Dominican Republic, Puerto Rico, Jamaica, Brazil, and Bangladesh. Leaders requested music from attendees and organized an impromptu international mini-concert. The concert took place on the last night of the series. Many musical contributions were submitted, but unfortunately, because of time restrains, they could not all be shared, though all the contributions were appreciated.

“Despite technical difficulties and other challenges, God emerged victoriously! We may not know, until we reach heaven, exactly how many souls were touched and accepted the Lord, but we do know that the Holy Spirit was working,” said Alao.

Organizers expressed thanks to the advisory team members, the international evangelists, the host and co-host, the translator, technician, and all those who worked tirelessly to make the evangelistic series a success.