enditnow® Emphasis Day is observed in the Caribbean

North Caribbean Conference holds a certification seminar in Virgin Gorda and a St. Vincent march is reported on TV.


[The Caribbean] Everyone in the room listened in horror as a victim told how her father froze while sexually abusing her because they heard her mother’s footsteps coming down the stairs. Victim A thought in her mind, “This is going to be over now, mom will finally come rescue me.” Then she heard the footsteps going back up the steps and she realized her mom had chosen to save her marriage over saving her child. 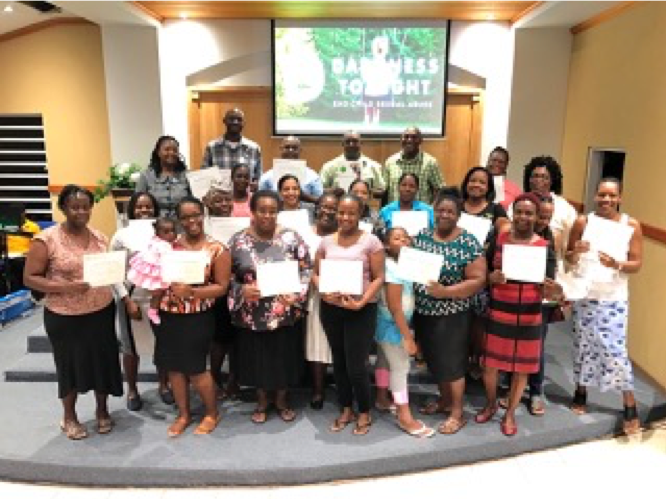 The eye-opening certification seminar where this story was told was held on Virgin Gorda, sponsored by Red Cross and facilitated by Kya McKenzie at the opening the enditnow® campaign weekend of August 25 and 26, 2018.

On the last Sabbath in August each year, Adventist women all over the world take part in activities that raise awareness about abuse – physical, emotional, sexual, verbal, and financial. This year, Linda Ambrose, women’s ministries director of North Caribbean Conference, called upon every department of the church to join women’s ministries in raising their voices against those things that dehumanize men, women, children, and senior adults.

And they rose to the challenge! There were marches with “Stop Child Abuse”, “End Domestic and Sexual Violence” balloons, dramatizations, presentations on emotional abuse, panel discussions, and pledges. Reports from participating churches include the islands of Sint Eustatius, Sint Maarten, Tortola, Virgin Gorda, St. Croix, and St. Thomas. Women’s ministries of the St. Thomas churches were also happy to donate much needed items to Family Resource Center for victims of domestic violence. To God be the glory!

“It’s my hope that we have done more than raise awareness. I pray we have put an end to blissful ignorance in our churches and communities; It’s time to SEE IT, STOP IT, REPORT IT!” writes Linda Ambrose.

[St. Vincent] Dennery Seventh-day Adventist Church participated in an enditnow® march, October 15, 2018, in their community to bring awareness to dangers of violence and to campaign on the urgency of ending all gender-based abuse. Interviews were recorded on the street with two women's ministries coordinators: Carmen Charles, for St. Vincent and the Grenadines Mission, and Golinda Pierre, for the Dennery Adventist Church, and were part of a TV report now uploaded to YouTube.

Reported by Annisha Fanis of GreatVisionDesigns TV, view on YouTube.