enditnow® Emphasis Day is observed in many Adventist churches in November while Europe observes International Day for the Elimination of Violence Against Women.

[Spain] Although the official enditnow® Emphasis Day of the Seventh-day Adventist Church is on the fourth Sabbath in August, in some countries the Women’s Ministries department prefers to address the problem of violence and abuse in November. We are impressed by the number of churches in Spain where the women organize church services and seminars around this important topic. This year we have seen photos from the churches in Jaén, Ferrol, Vigo, Dénia, Alcalà de Henares, Almeria, Elche and El Shaday.

Most of the groups used the material prepared by the General Conference Women’s Ministries department for the enditnow® Emphasis Day, “God’s Path to Resilience – Religion as a protector” by Julian Melgosa. 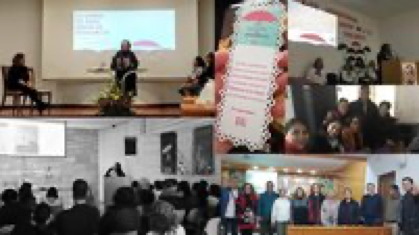 The women in Elche showed in a dramatized way how women in Bible times coped with the patriarchal community in which they lived. We want to thank all the women involved in these activities with their creativity and input, and who are saying no to violence against women.

International Day for the Elimination of Violence against Women, November 25