[California] Almost as soon as Compton Samoan Seventh-day Adventist Church began women’s ministry, it became clear one of their first needs was a women’s retreat. They also realized the widows in the congregation would benefit most from the nurture of a retreat. And not only widows in their own congregation. Sister Samoan churches in Southern California have also lost a significant number of men (many were church elders) in the past few years. With this need in mind, the team prayed for a way to hold a conference-wide women’s retreat for Samoan women.

At the first meeting in July 2021, the women’s ministry team presented the idea of a retreat. The main concern was COVID-19 restrictions. Then the reality of zero funds in the newly formed women’s ministry account became the greatest obstacle when the pastor asked, “How are you going to fund this event?” Women at the meeting prayed earnestly.

First Lady of the congregation Alo Lafo said, “We can’t just pray, we need to do our part. God can easily pour down what is needed, but God is a personal God. He wants to work through us and tabernacle with us.” Lafo herself wrote a sponsor letter and made copies for women to send out. 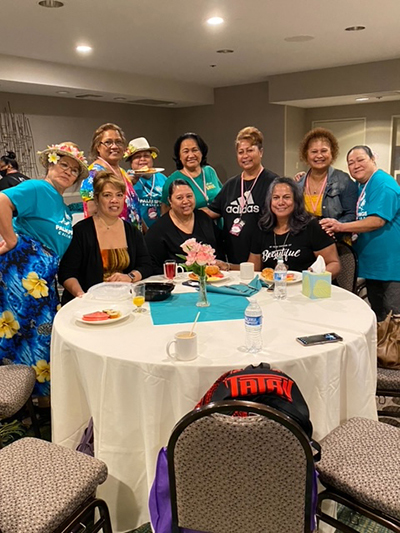 Without waiting for replies from the letter, they held two fundraising events. Soon they received word that the Asian Pacific Region and Southern California Conference would help sponsor the retreat.

God continued to work. From then on, funds began to pour in from the fundraisers and sponsor letters, friends, and family members. Pacific Union Conference helped fund the women’s retreat, and the General Conference Women’s Ministries helped fill the giveaway gift baskets.

Held in Palm Springs, California, the theme of the retreat, taken from Mark 5:41-42, was “Arise, It’s a New Day!” The ladies can’t stop talking about their experience throughout the weekend. The speakers were on fire with the Word. In the afternoon they held a seminar on mental health awareness, and after Sabbath they had social night.

Participants immediately began asking if the leaders would make the women’s retreat an annual event. Sipi responds, “Would God do it again? Yes!”