Attendees are inspired by testimony of woman who prepared 15 souls for baptism, including her formerly abusive husband.

[Zambia] Women of the Southern Zambia Union Conference (SZBU) gathered in Livingstone, the tourist capital of Zambia, for the union’s first Women’s Ministries Congress, held on the campus of Livingstone Institute of Business and Engineering Studies. The attendance of 306 women also included Shepherdess leaders.

A woman representing each of the four administrative regions of SZBU was honored for her dedication and commitment to duty in her church and community. The consistent witness and testimony of Serina Nkoma from East Zambia Field affected the people in her center of influence. Fifteen new believers are waiting for baptism, including her formerly abusive husband.


The last day of the congress with its theme, "Fill My Cup, Lord," June 7-10, 2017, coincided with the annual Women’s Emphasis Day, which falls on the second Sabbath in June on the Seventh-day Adventist worldwide church calendar.

Speaking to the women who are the majority membership in his union, the SZBU president, Dr Harrington Akombwa, officially opened the congress with his keynote address by challenging them to rise to the occasion and be united. He called on women to engage in a prayer lifestyle to instill good family values at the household level.

Mrs. Small’s sermons and presentations included topics on Spiritual Growth; Leading People to Christ; A Ministry for Every Woman; and Total Membership Involvement. When she first arrived at Livingstone airport, she was interviewed by Times of Zambia (see below).


Pastor Small preached the evening devotions and a lesson on Healthy Relationships.

“We thank and praise God for leading out in this first SZBU Women’s Congress,” reports Mrs. Chola.

[Livingstone] Heather-Dawn Small, director of Women’s Ministries at the General Conference of Seventh-day Adventists, was interviewed when she arrived at the international airport in Livingstone, Zambia by the Times of Zambia national newspaper. Read full story here: Times of Zambia, June 19, 2017, p. 13 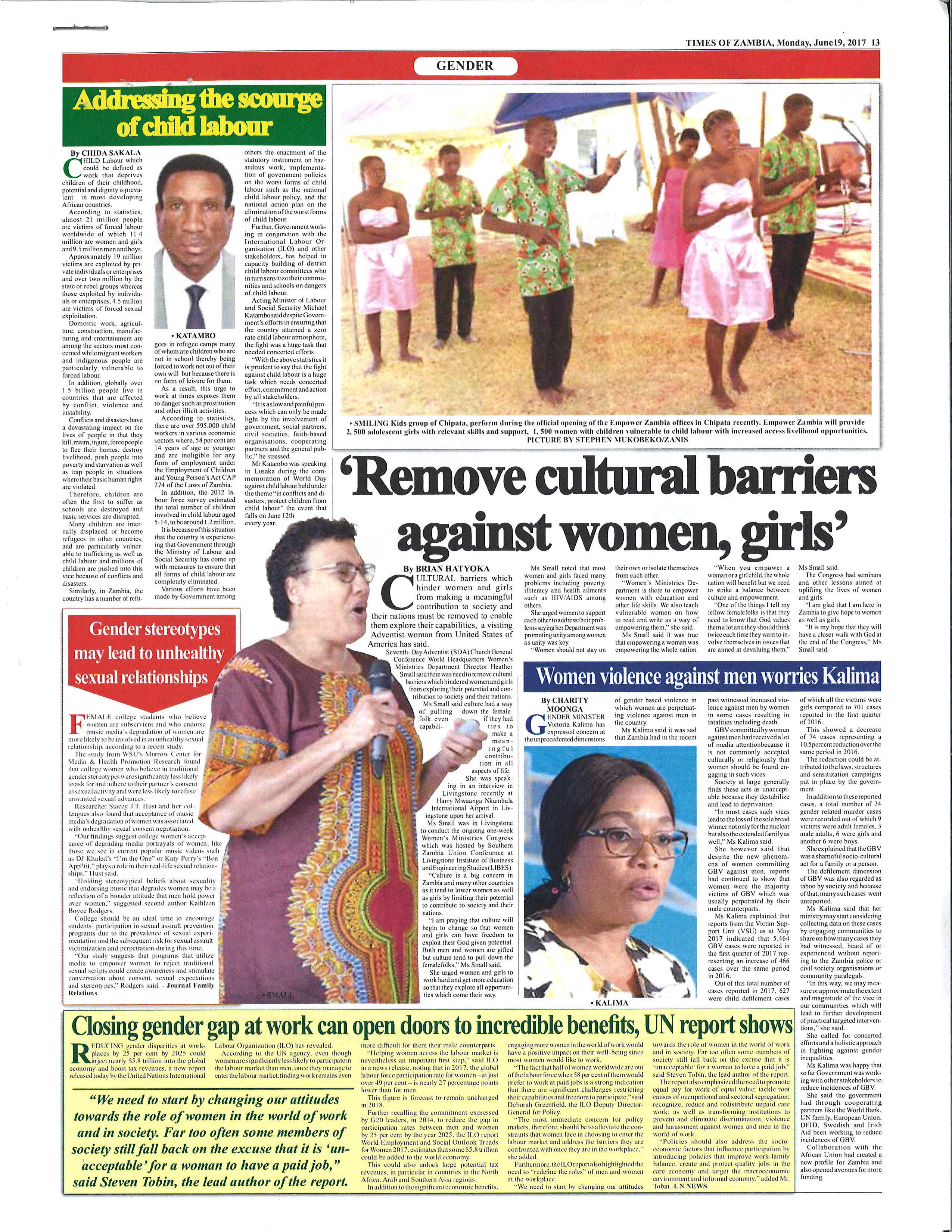 Hatyoka quotes Small as saying, "Culture is a big concern in Zambia and many other countries as it tends to lower women as well as girls by limiting their potential to contribute to society and their nations.

Women and girls face many problems including poverty, illiteracy, and health ailments such as HIV/AIDS among others. She urges women to support each other to address their problems saying her department of Women's Ministries is promoting unity among women because unity is key. “Women should not stay on their own or isolate themselves from each other.”

Small told the Times of Zambia that her office exists to empower women with education and other life skills, such as teaching vulnerable women to read and write through literacy programs.

Small encourages women and girls to get more education and explore opportunities. “When you empower a woman or a girl, the whole nation will benefit but we need to strike a balance between culture and empowerment,” said Small.

One of Small’s recurring themes when speaking to women is that God values them. She counsels them to think twice when they want to become involved in issues that are inherently aimed at devaluing them.

“I am glad that I am here in Zambia to give hope to women as well as to girls,” Small told Hatyoka. “It is my hope that they will have a closer walk with God at the end of the congress.”

Contributed by Brian Hatyoka, Times of Zambia, newspaper reporter and member of the Seventh-day Adventist Church in Zambia