30 July, World Day Against Trafficking in Persons [UN] This year focuses on the first responders to human trafficking who work in identifying, supporting, counseling, and seeking justice for victims, and challenging the impunity of the traffickers. Get involved by joining the conversation on all digital platforms: hashtags #EndHumanTrafficking and #HumanTrafficking

23 June, International Widow's Day [UN] There are an estimated 258 million widows around the world, and nearly one in ten live in extreme poverty (RES/65/189) In the widow's camp of refugee settlement of Balukhali, more than 116 widows, orphans, and women who have been separated from their husbands found shelter where no men or boys over the age of 10 years old are allowed. Photo: UN Women/Allison Joyce

15 June, World Elder Abuse Awareness Day [UN] In 2017, 1 in 6 older persons were subjected to abuse. With lockdowns and reduced care, violence against older persons is on the rise. (A/RES/66/127) 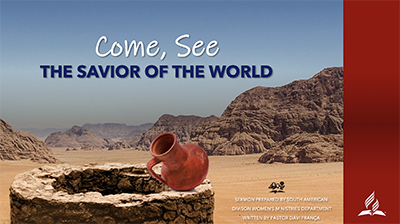 but she knew she must make Jesus known to everyone. Instead of her imperfect life being an excuse, her imperfect life became the substance of her message. She allowed her transformed life to transform the lives of her family, friends, and neighbors. The sermon is written by Pastor Davi França by invitation of the South American Division Women's Division.

31 May, World No-Tobacco Day [WHO] For this year-long global campaign for World No Tobacco Day 2021, Allen Carr’s Easyway is offering, via the World Health Organization, free quit support to 9500 frontline workers and tobacco users in 14 countries across the 6 regions through Live Online Group Seminars and Online Video Programmes (WHA Resolution 42.19) 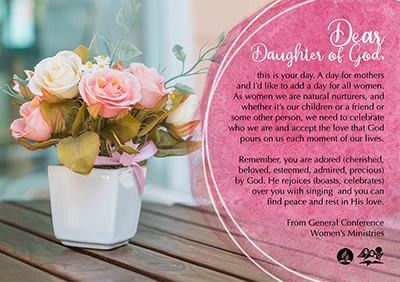 April 7, World Health Day [UN] Celebrate nurses and other health workers at the forefront of the COVID-19 response during this International Year of the Nurse and Midwife.

Samira, a Syrian refugee is one of the cutters in the cutting sector at the ‘Oasis Center for Resilience and Empowerment of Women and Girls’ operated by UN Women in the Azraq refugee camp in Jordan. Photo: UN Women/Christopher Herwig

[GC WM] International Women's Day of Prayer sermon packet, "I Will Go," focuses on the impossible things God calls us to do and presents examples of Biblical characters who responded, "I Will Go." The results were life-changing, not only for themselves, but for the history of whole nations. Written by Danijela Schubert.

The seminar, "Teach Us to Pray," outlines four ways to get the most out of your prayer time. Written by Zdravko Stefanovic.

Female genital mutilation (FGM) comprises all procedures that involve altering or injuring the female genitalia for non-medical reasons and is recognized internationally as a violation of the human rights of girls and women.

Abida and her child live in Ethiopia’s Afar Region. In Afar, prevalence of female genital mutilation has fallen sharply — down to 31% in some districts — in areas where the UNFPA-UNICEF Joint Programme on the Elimination of FGM is supporting community-led interventions. Photo: Sara Elgamal for UNFPA

Together, we can eliminate female genital mutilation by 2030. Doing so will have a positive ripple effect on the health, education and economic advancement of girls and women.

To promote the elimination of female genital mutilation, coordinated and systematic efforts are needed, and they must engage whole communities and focus on human rights, gender equality, sexual education and attention to the needs of women and girls who suffer from its consequences.