Although it is an uncomfortable subject for many people, it has become more and more obvious that abuse is a serious problem for Christians, for Seventh-day Adventists. Abuse in any form deforms the body of Christ—for the victim, for the perpetrator, and for the church that is left with the hurting members.

In 2016, after ADRA ceased involvement with enditnow®, six additional departments of the Seventh-day Adventist Church joined Women's Ministries as co-sponsors of the initiative: Children's Ministries, Department of Education, Family Ministries, Health Ministries, Ministerial Association, and Youth Ministries. Each of the sponsoring entities are committed to developing and sharing resources that address many expressions of abuse against women, children, and men.

What is enditnow® Emphasis Day?

enditnow® Emphasis Day, the fourth Sabbath of August, provides an annual opportunity for local churches to address this issue, to educate church members and leadership, to facilitate awareness in their communities, and to let victims know that their church cares about them.
Go to enditnow Emphasis Day

The Annual Council voted on September 16, 2001, to add an Abuse Prevention Emphasis Day to the annual worldwide church calendar of special days as the fourth Sabbath in August. Women's Ministries will coordinate resource packet material to be used for the special day in local church congregations.

Comments at the launch of the Church initiative in 2001 and recorded in the news brief are listed here.

Delegates at the Annual Council 2001 meeting came from all parts of the world to share resources; they developed nine principles of action intended to raise awareness of the abuse issue and to encourage churches to develop effective programs. 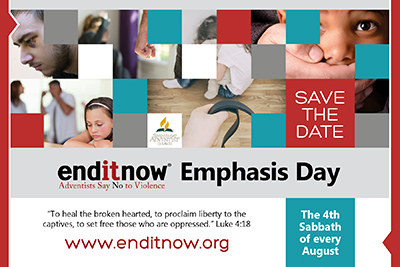 The sponsoring departments produced the save-the-date postcard (without a specific date) to use in local church districts for enditnow® Emphasis Day.

Women's Ministries directors in the local churches should plan very early so that this day can be part of the local church planning. Work closely with the pastor, keeping him or her informed.

The annual resource packet prepared by Women's Ministries includes a sermon, seminar, PowerPoint slide presentations for both scripts, and other resource materials as appropriate. A suggested order of divine service is included and often a children's story.
Go to archive of packets

We want to encourage all women to be involved in this special day. Women's Ministries leaders in local churches should plan very early so that this day can be a part of the local church planning by working closely with the pastor, keeping him or her informed.

Dr. David Williams, Honorary Associate of Health Ministries for the General Conference of the Seventh-day Adventists, presented a challenging message to church leaders during the Annual Council session of October 12th. His presentation centered on the EndItNow – Effectively Confronting Domestic Violence initiative (see video below). 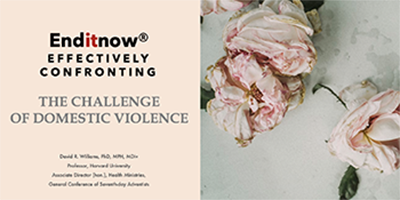 enditnow® co-sponsoring departments have resources at their websites:

The Seventh-day Adventist Church speaks out against gender-based violence.

Predators often find their next victim, a child or elderly person, in churches and schools.

What Can My Local Church Do to Help?

Suggestions and ideas to involve the local congregation in abuse awareness and enditnow events.

A training course to discover remediation and healing strategies to reclaim hope for sexual abuse victims and their faith communities.

Managing power without abuse is the true test of character and leadership.

Download files for your professional printer or print with your desk printer.

South American Division prints this annual enditnow resource, Breaking the Silence magazine in Portuguese and Spanish. The topic in 2018 is Suicide.

"Speak up for those who cannot speak for themselves; defend the rights of all those who have nothing." —Proverbs 31:8