[Brazil] The project that started less than four months ago at the Alto Maracanã Seventh-day Adventist Church in Colombo has already managed to rescue Silvana, a young mother what had stopped attending the church.

With emotional problems that were getting worse, she walked away in an attempt to find a solution for her life. But when approached on the street by her former pastor, she accepted the invitation to participate in a special class for women only, which would be held at the district headquarters.

With his wife at the helm of the Ministry of Women project, Pastor Marcelo Peres Argenton brought women who were looking for a way to feel welcomed into a class where they could talk more about their problems without risking any kind of prejudice.

The Ministry of Women project was initiated to work on the spiritual aspect of life while addressing emotional healing through the material studied each week. Each week the group members discussed life lessons from Home for Hope and Healing. 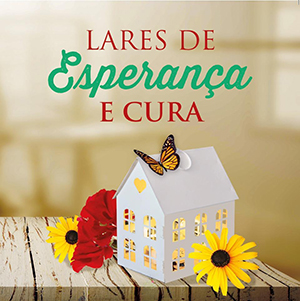 The Portuguese translation (shown left) is titled Lares de Esperançe e Cura. And that's what happened. Silvana realized that she could control her emotions more and find a way out of what she was initially looking for.

Aryana Kelle Argenton, wife of Pastor Marcelo, shared the special moment of Silvana’s baptism by entering the tank with her new friend and disciple. “This year we want to start another project from the Ministry of Women. We will start a Bible studio, which provides an environment of emotional relaxation through art while working at the same time on spiritual themes,” commented Aryana Argenton.