The following is an excerpt from Forgiveness of Healing: Extending the Olive Branch workbook written by Sharon Platt-McDonald with Sandra Dawes. The resource includes a presenter's guide and participant workbook, coming soon. Platt-McDonald carries multiple roles for the Seventh-day Adventist Church in Great Britain, including director of Women's Ministries and Health Ministries.

Historically, the phrase ‘to extend the olive branch’ is a reference to extending a peace offering as a sign that one wants to end an existing conflict. It is this concept that comes to mind when I think of forgiveness.

There is however another notable element to the olive branch. Scientific research has produced data which attests to the healing properties of the olive leaf.

Current research on the olive leaf extract has identified that the bitter substance in the olive leaf called oleuropein is responsible for its therapeutic properties. (www.herbwisdom.com) Classified as an antioxidant, the reported benefits of olive leaf extract range from promoting increased energy and healthy blood pressure, to treating infections and supporting the cardiovascular and immune system.

It is ironic that the bitter leaves of the olive have been used to bring about healing. The concept of the bitter making you better is an interesting one.

In this workbook we use the principle of the ‘bitter,’ bringing healing. Bitter life experiences that has caused us pain and embittered our lives can be used to heal the very experience that brought us pain. There are many challenging life experiences which individuals go through which they described as a ‘bitter pill to swallow’. Yet with the passage of time, reflecting on the journey from what was, to what now is, many are able to conclude that in spite of it all, the learning and growth that ensued has made them a better person and that they are now stronger as a result. However not all experiences are like that. Things sometimes turn out badly and the issue of forgiveness is one that they have to grapple with.

Reflecting on the olive branch as a symbol of peace and healing, the same can be said of forgiveness when it is extended to others. Forgiveness can bring peace to conflict situations and both the recipient and the one offering forgiveness can attest to the healing that commences as a result, and in some cases, reconciliation.

Throughout this workbook, references are made to the research in the area of forgiveness and its impact on wellbeing. Contemplate the tips and suggested advice and reflect on your own forgiveness journey. As you do so I trust it will inspire you to think again about the power of forgiveness.

As you review the case studies and share in the accounts of individuals who have been challenged to forgive in spite of the traumatic experiences they have encountered, take time to go through the associated reflection points. Recall a bitter life experience that you have encountered and think about how you can extend the olive branch in that situation to bring healing, wholeness and hope.

What forgiveness is and what it isn’t

Most people will acknowledge that forgiveness is easier to talk about but more difficult to practice.

C.S. Lewis said "Everyone says forgiveness is a lovely idea until they have something to forgive."

Forgiveness is generally defined as the resignation of resentment, anger or hurt resulting from a perceived offence against you and ceasing to demand punishment or restitution.

Forgiveness is usually reserved for serious betrayals and wrongs which, in the view of the one injured, are not acceptable and not justifiable. It is distinguished from excusing, which applies to less serious injuries or irritations. It is also distinguished from pardoning, which simply releases the injurer from punishment. Forgiving is not the same as accepting or understanding the wrong done.

Medical science highlights the benefits of forgiveness and the positive physiological and emotional changes which occur as a result. It is clear that forgiveness is a powerful tool.

It is important to note though that forgiveness is a journey and as such it takes time for the healing to occur. 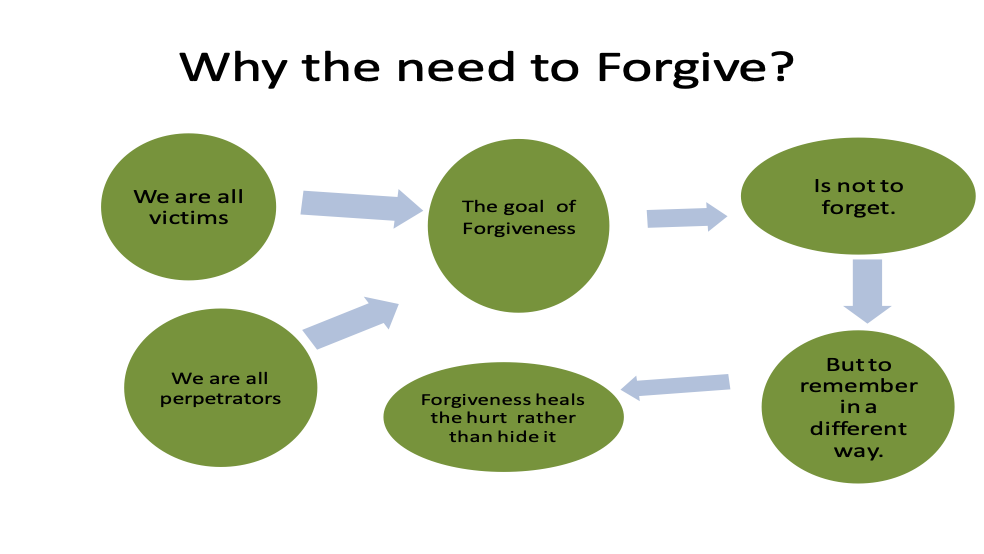 Why Should I Forgive?

In answering this question the following pointers may be helpful:

Many people are trapped in the bondage of un-forgiveness. Think about the following in regards to harbouring an unforgiving attitude. 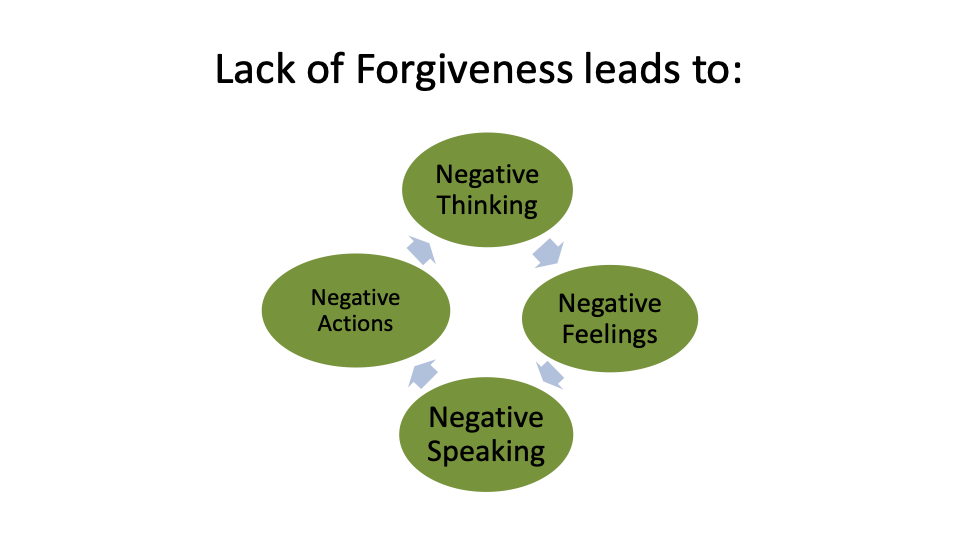 If you tell yourself you are unable to forgive you are in effect causing the following to happen:

Do I have to Forgive and Forget? 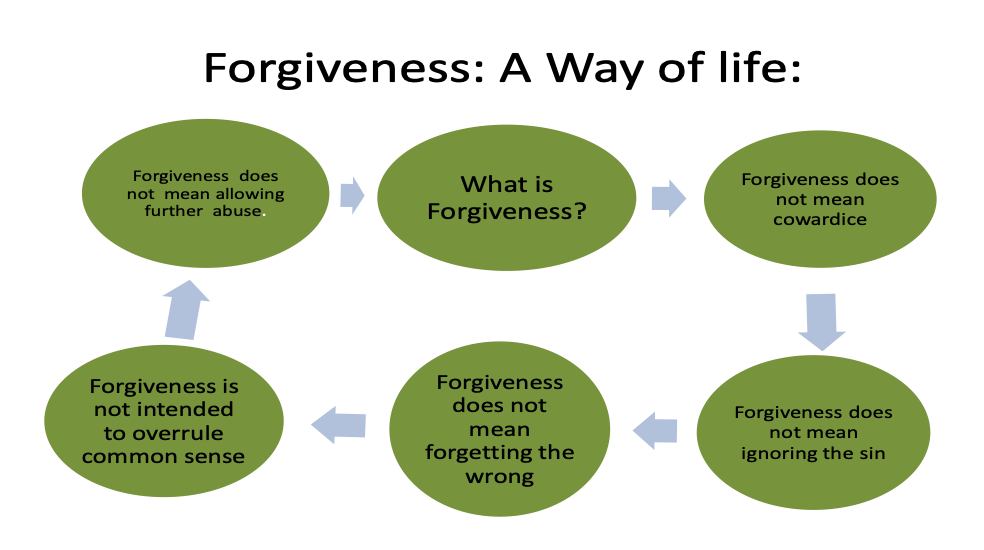 How Do I Cultivate Forgiveness?

As you contemplate this question and the possible responses, take time to analyse the following:

In contemplating your decision to forgive and the practical steps you will take to achieve this, it is useful to bear the following points in mind:

Having gone through each section of ‘What forgiveness is and what it isn’t’, were there aspects of forgiveness that you currently find challenging? If so what are they? Document the areas for development that you need to work on.