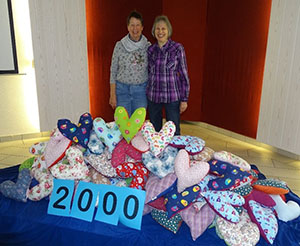 [Germany] A noteworthy milestone for the Mühlheim/Main sewing circle, "Lebensfreude" (Joy of Life), occurred February 16—in the second month of 2020, at meeting number 20, the sewing circle celebrated having produced 2,000 heart-shaped pillows. These pillows are distributed to local hospitals for breast cancer patients to help alleviate pain while recovering from surgery.

Since its launch in December 2013, the sewing circle has become a household name in Mühlheim, Germany. About twenty-five women (sometimes a man is also present) meet three times a year on a Sunday to sew heart cushions. Stopping midday for lunch gives everyone a break and the time to enjoy coffee and cake afterwards.


Hanna Wagner who founded the group receives many phone calls, emails, and letters each year from grateful women who experience hope and find relief from their pain through the heart pillows. She also receives other interesting calls.

In January 2020, the hospital in Bad Kissingen, Germany, began recruiting volunteers to sew heart pillows for their breast cancer 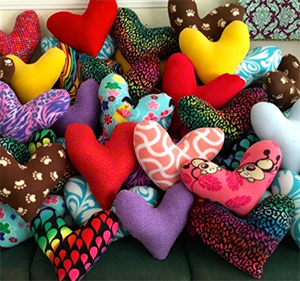 patients. An elderly woman there responded to the request printed in the local newspaper. The woman, herself a breast cancer patient 31 years ago, had not received a heart cushion (nor were these available, of course), but she wanted to do something for current breast cancer patients. When she searched the Internet for instructions and a pattern for sewing heart cushions, she found Wagner’s webpage, muehlheim.adventist.eu/Herzkissen, and called for help.

In January 2019, Wagner received a telephone call originating from a woman in Carinthia, Austria. The caller was manager of a social institution that hadreceived a request from the Villach hospital to help find a group willing to sew heart cushions for their breast cancer patients. The caller asked Wagner to help her start a sewing circle. While the Austrian group was recruited, organized, and pillows sewed, Wagner’s German sewing circle, Lebensfreude, helped supply the breast center in the Villach hospital with heart cushions. A friendship developed between the Austrian leader and Wagner, and they hope to meet each other in person when Wagner travels to Carinthia.

In autumn of 2019, the head of the children's intensive care unit in the Offenbach hospital asked Wagner if Lebensfreude could sew cover cloths for incubators to protect the premature babies from the light. Just in time for the World Preemie Day, November 17, 2019, the ICU unit received ten large covers. Three months later in February, the sewing group delivered two additional large covers and twelve smaller covers to the ICU unit to bring the total covers to a dozen for each size.

Buying the fabric and cutting out the heart pattern is one of Wagner’s responsibilities. She is delighted that two of the seamstresses in her group are now assisting her. One of the women had herself received a heart cushion five years ago from pillows sewed by Lebensfreude. 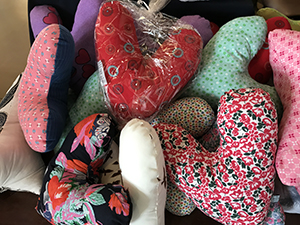 These two dear friends also support their leader by helping her organize activities such as patient days in the hospital, market booth in the Mühlheim shopping mile, Christmas market in the cancer rehabilitation clinic. At these events, the sewing circle display items they have made which are not only heart cushions, but cuddly things knitted or crocheted for premature babies. They also provide star beds for stillborn babies. The visitors at the sewing circle booth are happy to make donations and choose a thank you gift of a small heart cushion, a handkerchief box, or a lavender bag.


Through the sewing circle, Wagner has met many dear women, who feel like she does in that sewing heart cushions has become a matter of the heart. She has become friends with other members of the group, and Wagner reports that that her contact and prayers for these women have changed their lives.


Wagner says, “I am grateful to God for the strength, joy and health that he gives me for this work and makes me a blessing for many people. And I am very thankful for the blessing that I myself experience through this.”