The year 1995 was an amazing year for Adventist women

The year 1995 was an amazing year for Adventist women; in fact, it was designated as the Year of the Adventist Woman.

When my husband Dick was asked to take a position at the General Conference in 1992, Dorothy Watts recommended my name to Rose Otis who was the Director of the Office of Women’s Ministries. Rose and I met and hit it off, and in 1994 she asked me to help with Women’s Ministries on a part-time hourly basis to help with the scholarship and literacy programs. Everything was new and she wanted help to meet the challenges of a new ministry.

Rose Otis was an amazing woman, full of God-inspired creative ideas such as the devotional books for scholarships and the six challenges that women face. She wanted me to start a newsletter; I had almost no experience with computer programs, but Celia Cruz, Rose’s assistant, and others were gracious to help me. In 1994 I had the privilege of traveling to Moscow, Almaty, Kazakhstan, and Kiev, Ukraine with Rose. I learned much from her. During this time, Rose persuaded the General Conference to designate 1995 The Year of the Adventist Women, and Rose asked me to take charge of that as well as help with planning for the 1995 General Conference Session in Utrecht, the Netherlands. As you can guess, by that time I was working full time!

At the 1995 GC Session, Women’s Ministries was voted full Departmental status; before that it had been the Office of Women’s Ministries which meant that the office served at the pleasure of the General Conference President rather than equal to the other church departments. The Year of the Adventist Woman had many activities and much appreciated recognition for women.

That October at the Annual Council I was voted as associate director. Those were heady days; we got excited as division by division chose a director for Women’s Ministries; we would also get excited when a division office got a fax machine so we could contact them almost instantly. E-mail became more pervasive during this time which helped our work very greatly.

In 1997 Rose Otis became a Vice President in the North American Division—a first, so even though it was a loss to the GC Women’s Ministries, it was a blessing for women. Dorothy Watts, who had also moved to Maryland with her husband was elected to take Rose’s place. I learned many important lessons from Dorothy, another creative woman. She came up with the idea for the certification seminars. Sadly, after a very short time, she and her husband Ron transferred to India. I was then elected Women’s Ministries Director. What a challenge and what a blessing. I did not enjoy travel per se, but I loved getting the opportunity to meet such incredible women around the world and to try to make a difference in their lives and ministries. I was privileged to have Lynnetta Hamstra come in as my associate and she developed the Women’s Ministries Handbook among other projects; she was much more technologically knowledgeable than I, and so helpful! When she left to become a full-time mother, I was fortunate to have Heather Dawn Small come to the GC as my associate, and she continues the good things. All during my tenure Iris Kitching was my assistant; I never had to worry about happenings in the office with Iris handling things.

Thinking back, I am most proud of the certification program which I implemented, but especially getting the world church to designate the fourth Sabbath of August as Abuse Prevention Emphasis Sabbath, now known as enditnow® Emphasis Day. God has blessed Women’s Ministries because He really cares about women and their lives and ministries. May Women’s Ministries continue strong until Jesus comes—it does make a difference!

By Ardis Stenbakken, previous director of Women's Ministries for the General Conference of Seventh-day Adventists 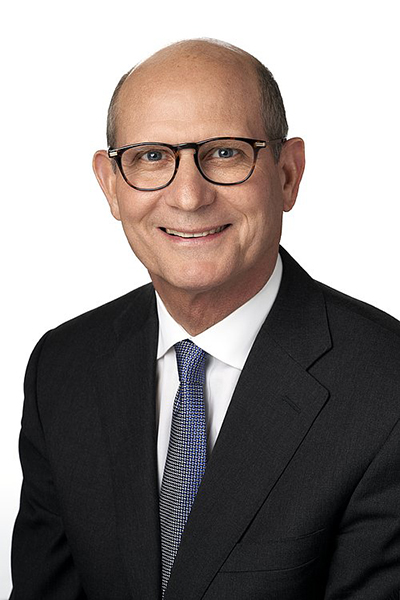 The President of the General Conference Sends His Congratulations 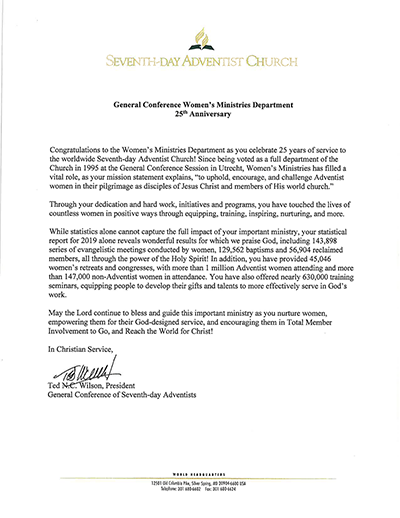 Congratulations to the Women's Ministries Department as you celebrate 25 years of service to the worldwide Seventh-day Adventist Church! Since being voted as a full department of the Church in 1995 at the General Conference Session in Utrecht, Women's Ministries has filled a vital role, as your mission statement explains, "to uphold, encourage, and challenge Adventist women in their pilgrimage as disciples of Jesus Christ and members of His world church."

Through your dedication and hard work, initiatives and programs, you have touched the lives of countless women in positive ways through equipping, training, inspiring, nurturing and more.

While statistics alone cannot capture the full impact of your important ministry, your statistical report for 2019 alone reveals wonderful results for which we praise God, including 143,898 series of evangelistic meetings conducted by women, 129,562 baptisms and 56,904 reclaimed members all through the power of the Holy Spirit! In addition you have provided 45,046 women's retreats and congresses, with more than 1 million Adventist women attending and more than 147,00 non-Adventist women in attendance. You have also offered nearly 630,000 training seminars, equipping people to develop their gifts and talents to more effectively serve in God's work.

May the Lord continue to bless and guide this important ministry as you nurture women, empowering them for their God-designed service, and encouraging them in Total Member Involvement to Go, Reach the World for Christ!

"The Lord announces the word, and the women who proclaim it are a mighty throng." —Psalm 68:11 (NIV)