"When a great and decisive work is to be done, God chooses men and women to do this work, and it will feel the loss if the talents of both are not combined" ( Ellen G. White, Evangelism, p. 469).

Preserving the Memories of Adventist Women of Distinguished Service

During 1995—Year of the Adventist Woman—it was decided to honor some of the important women of Seventh-day Adventist Church history in a photo display at the General Conference World Headquarters. A committee was set up with Kit Watts, assistant editor of the Adventist Review, as chairperson. The committee consisted of women of various ethnic backgrounds or who had served the church in various divisions of the world.

It was the mission of this committee to pick about thirty of the most important women in our church's history.

It quickly became obvious that this was not just hard—it was almost impossible, as there were numerous women who represent so many different facets of our church history. Finally the committee came up with the idea of dividing our church history into three 50-year segments, and choosing about 10 women from each of those eras, and as much as possible, representing the different parts of the world field. Because the first 50 years of our history (1844 ¬1894) took place in North America, all of those representing that period are from North America. Many of those from the next 50-year period, (1895 - 1945) were missionaries, and numerous of the last 50 years (1946-1996) represent various world divisions.

Once the women were chosen, the search for photos began. These women were humble workers, and with few exceptions, those who served before the twentieth century left nothing more than a snapshot, if that. A great deal of research effort and photographic expense was required to come up with the photos.

At the time the pictures were hung, all of those in the 1946 - 1996 section were living, but since then two of the women, Betty Holbrook and Elsa Luukkanen, have died. When Rose Otis, Women's Ministries Director, left the General Conference Department to go to the North American Division, her picture was added to the display. In the display, no dates are given for those who are still living.

This display became one of the more popular stops on the General Conference World Headquarters tour. Rose Otis then thought it would be nice to have the display available to the women in the various parts of the world so that they too could visualize many of the women who have served their church so faithfully, and understand that women have always been an important part of the history and leadership of the Seventh-day Adventist Church.

Seventeen pictures of the women from the General Conference display have been chosen and framed to be sent to each world division. Because different women are more known in and important to various parts of the world, the seventeen chosen are not always the same for each division. In addition, three matching empty frames are being sent to each division so that pictures of women from that part of the world can be added.

Each of these women is important in her own right, but she is also a representative of the millions who have labored and worked in the Adventist church, often unknown and unnoticed.

The display is in honor of Rose Otis' mother, Grace Niesen, a committed third generation Adventist woman, and has been paid for with funds from her estate.

There are numerous ways the display can be used. One of the most obvious is a wall display such as used at the General Conference Headquarters. And this may be appropriate at least part of the time. In most divisions, however, this would mean that very few women would actually see the display. It is suggested that as much as possible the display be used out in the field where people will be able to see it. For this reason, a carrying case has been included with the display.

This display can and should be particularly meaningful and useful throughout 1998, the centennial of Women's Ministries in the Adventist Church.

Suggestions of places the display can be used: 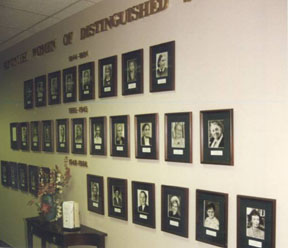 How the pictures can be displayed:

To make the display more attractive, a table covering in one of the Women's Ministries colors is provided, as well as cards giving each woman's name and dates to display with the individual's picture.

When the pictures are displayed on a flat surface, it makes an attractive display if flowers and other feminine items, especially those of historical significance, are added. Some of these items might be women's gloves, fans, delicate boxes or vases, dainty items of lace or other needlework, dolls, tea cups, old copies of SDA books, et cetera.

As often as possible, some type of program or pamphlet giving historical sketches of the women, announcements, posters, or other forms of publicity should be used in connection with the pictures so that people have a clearer understanding as to what the pictures are all about. At the General Conference this is done by the tour guides and by our "Adventist Women of Distinguished Service" brochure, as the pictures by themselves do not tell enough of the story. The biographies of all the women in the original display are given here, as well as additional information that you can use in planning programs, plays, displays or other material to go with the pictures.